Get Everything you need to know about Julia Clark Downs!

Better Call Saul season 6, episode 9 featured a moving tribute to a mysterious woman, but who is Julia Clark Downs and what does she have to do with the show?

Even though the hit show strongly fictionalizes facets of the New Mexico criminal underground, Better Call Saul’s commitment to realism is part of what makes it so compelling. Such realism would not be possible without the participation of real people like Clark Downs.

Better Call Saul as well as its predecessor, Breaking Bad, both tell larger-than-life stories of criminal enterprise as well as the drug trade. However, there is a sense throughout both series, particularly Better Call Saul, that the fictional characters on screen are not far removed from reality.

The titular character, Saul Goodman née Jimmy McGill, in particular, feels like a genuine representation of the type of unscrupulous legal expertise required to facilitate the high end of the drugs trade. It is no accident that such a compelling character was created.

The participation of stakeholders like Julia Clark Downs is responsible for much of Better Call Saul’s authenticity.

Julia Clark Downs: Who Is She?

Julia Clark Downs was a true Alberquerque lawyer who served as a consultant on Better Call Saul to make it feel as authentic as possible.

Clark Downs, who has practiced law both individually and as part of the State’s Attorney, may be able to provide unique insight into the workings of the New Mexico justice system.

Although the extent of her involvement is unknown, it is clear that her legal expertise was critical in making Better Call Saul’s lawful scenes as correct and accurate as possible.

Clark Downs was tragically killed in a car accident, which explains the title card used during Better Call Saul season 6. 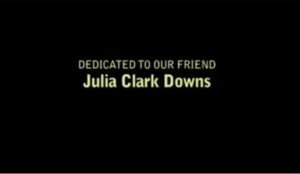 It’s never easy to write a prequel, especially to a tv series as beloved as Breaking Bad. The real point of difference, aside from telling a compelling story, can be found in the details.

It takes more than explosive set pieces to create a believable and engaging world; it takes crafting settings and characters that feel real, especially in an environment as firmly rooted as the Breaking Bad/Better Call Saul world. This is where people with expertise like Julia Clark Downs come in handy.

Consulting with those who are involved in the New Mexico legal system gives Better Call Saul valuable inside information, making it appear even more insightful and informative.

Given that the show is primarily set in legal settings, this method is necessary. Without the ability to pick the brains of genuine experts like Julia Clark Downs, Better Call Saul would likely feel far less deeply layered and suffer as a result.

In many ways, the details given by Clark Downs and others like her have contributed to Better Call Saul’s undeniable success. As a result, her significance, as well as her contribution, cannot be overstated.