GET ALL THE DETAILS ON THE RELEASE OF BLACK BIRD EPISODE 6 ON APPLE TV+! DATE AND TIME OF RELEASE!

Apple TV+ now offers Black Bird! If you want to learn everything there is to know about the release of Episode 6, keep reading!

At the end of this week’s episode, investigators have no evidence that the bike Brian and Lauren received from Audrey is the same one Jessica used.

Even though it is the same bicycle, Larry had destroyed the serial number so that the authorities could not link Audrey’s bicycle to Jessica.

Because the court already believes that the investigators in Larry’s case did not do a good job, inconclusive evidence will only damage the prosecution, which influences Edmund Beaumont to decide not to use Brian and Lauren’s discovery to try to convict Larry.

As a result, Beaumont, Brian, and Lauren may be unable to convict Larry of Jessica Roach’s murder.

Even if they decide to use Jimmy as a witness to reveal Larry’s revelation to him, the lack of physical evidence will almost certainly favor the alleged murderer. We tell you everything you need to know about the release of Black Bird episode 6 on Apple TV+!

WHAT ARE THE RELEASE DATE AND TIME FOR BLACK BIRD EPISODE 6 ON APPLE TV+?

The wait is no longer excruciating! Episode 6 of Black Bird will be available on Apple TV+ on August 5, 2022.

For the most impatient, episode 6 of Black Bird will be available on Apple TV+ at 9 a.m. Read this to find out if the series is based on a true story.

The finale, episode 6, is in a week, and there is still a lot to cover. Before being attacked by his fellow inmates, Jimmy requires the burial grounds of Larry’s victims.

Jimmy’s secrets have been revealed by the caretaker, and he is about to be brutally attacked. 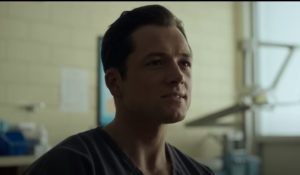 Larry is suspicious but willing to reveal his secrets. Asking the question directly may frighten him, but it may be Jimmy’s only hope.

Brian and Lauren will continue their investigation, but all hopes are now placed on Jimmy. Will he be able to obtain a confession before being attacked and possibly murdered? Will Jimmy be set free? And, more importantly, will Larry be released or incarcerated for the rest of his life?