Black Panther 2: Who is Namor the new villain?

Black Panther 2: Who is Namor the new villain?

FOREVER FIND OUT WHO NAMOR IS IN BLACK PANTHER WAKANDA!

Disney Plus now has Black Panther! Continue reading to find out who Namor is! The first look at Namor in Black Panther: Wakanda Forever has been released by Marvel.

Namor has long been rumored to be the main antagonist in Ryan Coogler’s Black Panther: Wakanda Forever.

Its inclusion raised expectations that the plot would revolve around the war between Wakanda and Atlantis, the undersea world ruled by Namor. Read on to find out who the new Black Panther is.

With Marvel’s Black Panther: Wakanda Forever marketing campaign still in the works, the only glimpses of Namor’s design in the MCU have appeared on various merchandise and promotional items.

These previews came after rumors that Marvel Studios was reimagining Namor for the MCU to incorporate Aztec or Mayan culture into Atlantis.

The first promotional images for Black Panther: Wakanda Forever finally revealed what Namor might look like, but they didn’t quench viewers’ thirst for seeing him in action. We tell you everything you need to know about Namor in Black Panther 2!

IN BLACK PANTHER 2, WHO IS NAMOR?

Namor, also known as Sub-Mariner, is the ruler of the oceans and the king of Atlantis. Namor inherited his abilities from his only parents.

Her father was an explorer sent to Antarctica by Woodrow Wilson to investigate Sir Ernest Shackleton’s disappearance, and her mother was an Atlantean princess named Fen.

Namor, as one would expect from a sea hero, can communicate with and control sea creatures, breathe underwater, as well as swim with ease.

In some iterations, he can also heal himself while submerged and even telekinetically control water. Namor is also an excellent fighter on land, owing to his superhuman strength and speed. For some reason, he can also fly. That explains why he has small wings at his ankles.

Namor has been blessed with the ability to be many things, including a hero and a villain. As part of Black Panther: Wakanda Forever, he appears to be the film’s antagonist.

Furthermore, Namor and T’Challa have a particularly bitter feud in Marvel Comics because Namor was the first to conquer Wakanda, a previously unconquered nation. 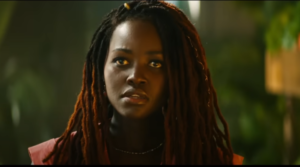 Namor is an atypical character. He’s been dubbed “Marvel’s first mutant” because his abilities stem from a genetic mix of human and Atlantean DNA.

As previously stated, Namor’s history in the comics is lengthy and complicated, and his status as a mutant frequently plays an important role in the plots of X-Men stories and the larger Marvel Universe.

With the recent revelation of Ms. Marvel’s mutant status, it appears that some interesting potential storylines for the MCU’s future have been set up.

But, with only a brief glimpse of Namor’s role in Black Panther 2, we’ll have to wait and see what larger role he might play.