Frozen 2: Find all the songs from the movie!

Frozen 2: Find all the songs from the movie!

DISCOVER ALL OF FROZEN 2’S MUSIC ON DISNEY PLUS!

Disney Plus now has Frozen 2 available! Continue reading if you want to find all of the songs! Despite mixed reviews, Frozen 2 became the highest-grossing animated movie of all time when it was released in November 2019.

The soundtrack, which included new hits such as “Into The Unknown” and “Show Yourself,” was a major reason for the movie’s popularity, as it was with the first movie in 2013. The explanation for the ending of The Snow Queen 2 can be found here.

Unlike the first movie, there was no universal phenomenon like “Let It Go,” but it was nearly impossible to outperform it. Nonetheless, Frozen 2 provided plenty of earworms for fans young and old, and even gave Jonathan Groff’s character Kristoff a much-anticipated song in the form of a 1960s power ballad. So, if you enjoyed the movie, you’re probably curious about where you can find all of the songs from Frozen 2? Everything is revealed to you! 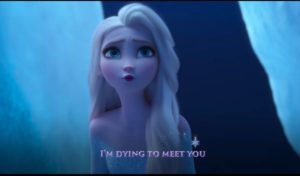 WHAT SONGS ARE IN FROZEN 2?

After “Let It Go” became a cultural phenomenon, the Frozen soundtrack set a precedent, and today, with 298 million plays, it is the most-streamed Disney song on Spotify.

While no other Disney music in the modern catalog of Disney music has been able to dethrone “Let It Go,” the entire cast’s comeback from The Snow Queen may have a chance to top the first hit. Here are the brand-new original songs from Frozen 2’s soundtrack!