GET ALL THE DETAILS ABOUT THE RELEASE OF KILLING EVE SEASON 5 ON CANAL+! RELEASE DATE, RENEWAL.

On Canal+ and AMC, you can watch Killing Eve! Continue reading to find out if the fifth season of Killing Eve will be produced. Killing Eve is an international spy mystery centered on the obsession between former British spy Eve Polastri and Villanelle, a handsome Russian assassin, created by Phoebe Waller-Bridge, who served as executive producer and showrunner for season 1 in 2018. Read this to find out why Season 4 ended the way it did.

Killing Eve was never going to be one of those shows that would run for ten seasons or more. There’s a contingent of fans who hoped the show had come to an end after that near-perfect first season. But here we are, four seasons later, and the question persists. So, will there be a fifth season of Killing Eve? Everything is revealed to you!

WHEN WILL SEASON 5 OF KILLING EVE BE RELEASED?

On April 10, 2022, the fourth season came to an end. Sadly, Killing Eve will not be renewed for a fifth season. The cancellation of Killing Eve was announced in March 2021, just two months after season 4 was officially announced. Killing Eve comes to an end for a variety of reasons, including the desire to give the series and its characters a fitting and definitive conclusion.

Season 4 of Killing Eve had a definite ending for Eve and Villanelle, ruling out Season 5. Killing Eve is over, according to the show’s stars and producers, and there are no plans for a fifth season or movie. 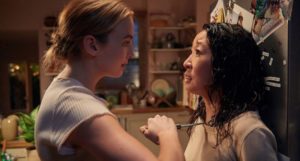 WHERE DO WE GO FROM HERE? ARE YOU READY TO SPIN-OFF?

AMC Networks also revealed that the Killing Eve universe could be expanded through spinoffs. In early April 2022, it was revealed that a spin-off series centered on Carolyn Martens was in the works. Carolyn is presumably a prequel series about the MI6 spymaster, who was played by Imogen Daines in the season 4 flashbacks set in 1979 in Killing Eve.

Fiona Shaw could also return to the role of Carolyn in the present day. Given how Season 4 of Killing Eve ended, there are few characters left to carry on the story, so prequels may be the way to go if other spin-off series are planned. by the TV show Killing Eve