FIND OUT EVERYTHING ABOUT THE RELEASE OF LOVE DEATH + ROBOTS VOLUME 4 ON NETFLIX! RENEWAL, RELEASE DATE!

Love Death + Robots is now on Netflix! Continue reading if you want to learn everything there is to know about the release of Season 4!

The Animated Anthology Series Love, Death, and Robots allow Netflix to showcase incredible works of animation in each episode. The series, a reimagining of the 1981 sci-fi film Heavy Metal, has aired for three seasons and features the voices of movie stars including Mary Elizabeth Winstead, Samira Wiley, Elodie Yung, and others.

WHAT IS THE NETFLIX RELEASE DATE FOR SEASON 4 OF LOVE, DEATH, AND ROBOTS?

The third season received very positive reviews, which can only bode well for a potential Volume 4. Similarly, the series was highly anticipated, and it is already trending after only a few hours. Finally, in April 2021, creator Tim Miller and director Jennifer Yuh Nelson stated that if Netflix approved Volume 4, the team would be ready.

Given all of this information, and even though the series usually ends after the third season, we are optimistic about Volume 4. In the event of a renewal, Season 4 of Love Death + Robots on Netflix should be available in mid-2023! 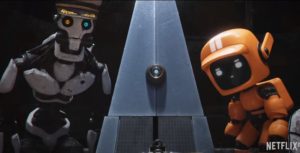 WHAT CAN WE EXPECT FROM LOVE DEATH + ROBOTS VOLUME 4?

In the final episode of Season 3, we see a Deaf Knight and a Siren of Myth form an unusual bond as they engage in a deadly dance.

Their attraction has fatal consequences involving blood, treasure, and death. Season 4 of Love Death + Robots on Netflix is expected to bring a new series of short, compelling stories centered on the themes of love, death, and robots if the series is picked up. The format is expected to remain the same, with the series consisting of ten episodes!