DISCOVER THE SYNOPSIS AND EXPLANATION FOR THE END OF MOON KNIGHT EPISODE 2 ON DISNEY PLUS! SPOILERS!

Disney Plus subscribers can now watch Moon Knight! If you’re looking for a summary and explanation of the conclusion to episode 2, continue reading! Moon Knight Episode 2 begins with Steven awaking in his bedroom, far removed from the bathroom drama that concluded the previous chapter. Steven eventually returns to the museum to join JB. They watch the security videos together.

Interestingly, there is no sign of a jackal, and the video depicts Steven running around the museum aimlessly. Fortunately, the museum will not file a complaint regarding the bathroom damage. To learn when Moon Knight Episode 3 will be released, continue reading.

Steven is summoned to his manager’s office and sent to the doctor for treatment, but he is also fired. Brilliant. In any case, Steven begins to investigate this strange occurrence that is interfering with his life and, in particular, discovers a bag in a storage locker. Passports and a pistol appear to indicate severe Jason-Bourne amnesia. 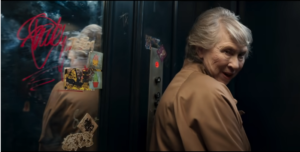 Marc believes it is an avatar of Kohnshu, the Egyptian moon god. Its mission is to safeguard the innocent and to ensure that those in need receive justice. Steven rushes out of the building upon seeing Kohnshu, but on his way out, he runs into Layla on her bike. After apprehending her, we discover that Layla is Marc’s wife. Of course, Steven is completely unaware of all of this.

When Layla returns him to her apartment, Marc’s voice rings out once more, pleading with him to get her out because he is “overwhelmed by events.”

As Steven delves deeper into his alter ego’s life, he speaks with Layla and is astounded Marc is considering divorce. While Steven rambles and attempts to convince Layla of what is happening, Marc cautions her not to, warning her that it could result in her death.

Layla eventually discovers the Golden Scarab, emphasizing that it is an item that leads directly to Ammit’s ushabti. Steven begs Layla for assistance, admitting that he has no idea what this alleged second life entails. DC Kennedy and DC Fitzgerald arrive at Steven’s apartment following a knock on the door.

Regrettably, they discover the forged passport and the gun. Naturally, the agents handcuff him, claiming that Marc Spector is an international vigilante who murdered a group of archaeologists by shooting them in the back of the neck after tying them up with a cable.

After episode 2 of Moon Knight, things take a turn for the worse when Steven does not relinquish the wheel to Marc and is attacked by the “jackal.” Surprisingly, when he lands with a superhero landing, he conjures up his Moon Knight costume.

Yes, he is a force to be reckoned with and is largely invincible. However, he lacks Mark’s ability to injure the jackal. As a result, Steven transfers authority to Marc to avoid delaying the inevitable. The ceremonial costume is worn, and the “jackal” is revealed when Marc manages to impale him on a spiked structure.

After episode 2, the primary concern is that Harrow now possesses the beetle, which simplifies his task of locating Ammit’s grave. And this complicates Marc’s task, as he must now not only prevent Harrow from resurrecting Ammit but also keep a neurotic Steven awake 24 hours a day and aware of his imprisonment in Marc’s subconscious and musings.

Marc promises Steven at the end of Moon Knight Episode 2 that once he repays his debt to Khonshu, he will never hear from Marc again. As a result, he continues his mission and joins Egypt in a state of advanced intoxication to silence Steven. It’ll be interesting to see how long he can keep Steven quiet because, despite his polite demeanor, he is adamant about maintaining control. Additionally, we’ll be watching with bated breath to see what mayhem Harrow unleashes now that he has the scarab.