Never Have I Ever Season 3: Explanation of the end!

Never Have I Ever Season 3: Explanation of the end!

DISCOVER THE EXPLANATION FOR THE END OF SEASON 3 ON NETFLIX FOR NEVER HAVE I EVER! SPOILERS!

Never Have I Ever is now on Netflix! Continue reading for an explanation of Season 3’s ending! Never Have I Ever Season 3 is finally here, and it’s one of the most important seasons for Devi as well as her friends as new loves and opportunities arrive.

Devi fulfills her dream of becoming Paxton’s girlfriend in the third and penultimate season of the show, but when she sees the reaction to their relationship at school, she goes haywire and begins to doubt Daxton’s power.

But the final season also forces Devi to make the most important decision she’s ever had to make. Devi’s senior year will be spent at home with her friends or at an elite boarding school in Colorado. Here’s how Season 3 of Never Have I Ever concludes and what Devi decides!

ENDING EXPLAINED FOR NEVER HAVE I EVER SEASON 3!

Devi is courting a new man in Season 3 of Never Have I Ever as if having two love interests wasn’t enough. Des is everything Devi has ever wanted, and what makes him even better is that he is Indian-American.

Des arrives just in time to make her feel better after her breakup with Paxton. They strike up an instant connection, and after a few squabbles, they end up getting together.

However, Des’ mother, Rhyah, does not want her son to become involved in Devi’s problems, which she refers to as “too much.” Devi is still grieving the loss of her father, which Rhyah interprets as a sign of someone unstable. Des loves Devi, but he cannot go against his mother and is forced to end their relationship.

Devi is once again separated by two people, allowing her to take a step back and question herself. Interestingly, one person has remained a constant presence in her life throughout this turbulent time. Ben.

With Paxton and Des out of the picture, Ben appears to be Devi’s only option, and it turns out he was the best after all. Devi is taunted by Ben while complaining about her virginity, who tells her that even if she’s on her deathbed, he’ll give her “a free fuck.”

When she shows up at his door, she makes him keep his word. Her story started with her desire to lose her virginity, and she is finally ready to do so with Ben.

After everything that has happened, Devi should find things easier with Ben. She never had to hide, feel ashamed, or wonder who she was. Ben had not only witnessed her ups and downs, but he was also becoming more accepting of her. 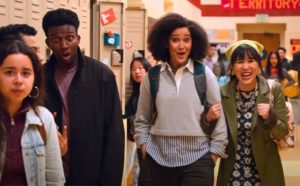 She’s spent her entire life looking for someone who will accept her for who she is, and now she realizes that Ben has been there all along. So, when she knocks on his door at the end of Never Have I Ever Season 3, it appears that they can finally be together, without the looming shadow of another crush.

Regarding college, Devi understands that life is unpredictable and that anything can happen at any time. Nobody knows what will happen, so she makes the most of the time she has left by spending it with the people she cares about.

So, even though Shrubland appears to be a fantastic place with fantastic opportunities, Devi chooses to stay in Sherman Oaks and work on her grades to attend Princeton.