Only Murders in the Building Season 2 Episode 6: The Ending!

Only Murders in the Building Season 2 Episode 6: The Ending!

EXPLANATION OF THE ENDING OF EPISODE 6 OF SEASON 2 OF ONLY MURDERS IN THE BUILDING! SPOILERS!

On Disney Plus, only Murders In The Building is available! Continue reading for an explanation of the ending of Season 2 Episode 6!

Cinda Canning, a rival podcaster, begins Performance Review plotting and scheming. Poppy, his assistant, was able to set up an interview with Jimmy Russo.

This cunning man claims that Mabel severed his finger many years ago. Cinda intends to use this testimony in a smear campaign, hoping to re-emerge Mabel as the primary suspect. Read on to find out how many episodes Season 2 will have.

Mabel has reconciled with the artist Alice, and the two talk about Mabel’s past. Charles speaks with Jan, who believes the couple is still in a relationship. He is terrified by the murderess’ steely determination, even though she admits she has no one else in her life, and he feels sorry for her.

After the shocking plot twist of the previous episode, Oliver is nervously awaiting the results of his DNA test. Will’s father may not be Oliver, and he suspects Teddy is the real father.

We answer all of your questions about the end of episode 6 of Season 2 of Only Murders in the Building!

MURDERS IN THE BUILDING IN SEASON 2 EPISODE 6 ENDING EXPLAINED!

As a result, she may attempt to frame Charles, Mabel, and Oliver for Bunny’s murder to create a compelling plot.

Furthermore, the trio is her direct competitor, and Cinda may attempt to eliminate them by framing them for a heinous crime.

Mabel meets the mysterious texter on the subway at the end of Episode 6 of Season 2 of Only Murders in the Building.

Mabel massacres the person in a video that is widely circulated. These scenes are set against Poppy’s lyrics, which paint Cinda in a negative light. 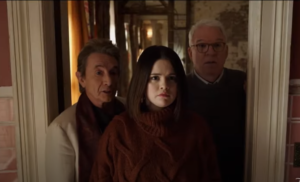 As a result, the episode’s conclusion strongly suggests that Cinda may have played a role in Bunny Folger’s death.

While the plot twist would be intriguing, it’s unlikely that Cinda murdered Bunny and implicated Charles, Mabel, and Oliver in the case solely to create a podcast out of it.

Cinda is certainly hiding some dark secrets, but she is unlikely to be Bunny’s murderer. Regardless, she may be the one attempting to frame the trio in this case.