DISCOVER THE EXPLANATION FOR OUTLANDER’S FINAL SEASON ON NETFLIX! SPOILERS!

Outlander is now streaming on Starz & Netflix! If you’re curious about the conclusion, continue reading! The Outlander season 6 finale picks up where the previous episode left off, with Richard Brown’s security committee picking up Claire for her trial.

Brown dispatches a man to break into the house and kidnap Claire, but Claire shoots the man, precipitating a shootout that forces Claire and Jamie to barricade themselves in their house for the night.

Soon after, Fraser’s Ridge settlers arrive and demand that Claire stand trial for Malva’s murder. To learn when season 7 will be released, continue reading.

Claire and Jamie are apprehended, and the remainder of the episode is devoted to their journey to Wilmington. Meanwhile, Bree, Roger, and Jemmy embark on another journey, this time to Roger’s seminar.

Along the way, Jemmy’s haircut, caused by lice, reveals the identity of Jemmy’s real father, resolving the season’s mystery. We reveal everything about Outlander’s Season 6 finale!

Richard orders his men to render Jamie unconscious as part of his vengeance. Claire, who is present at the scene, has doubts about her husband’s death. Richard, on the other hand, intends to deport Jamie to Scotland forcibly.

Richard is well aware that murdering Jamie will result in unintended consequences, particularly given his influential relatives and friends. If he killed Jamie, his authority as head of the Security Committee would not protect him from higher authorities or the law.

Additionally, Richard wishes to subject Jamie to pain rather than death. He wants Jamie to be stranded on a boat, helpless and incapable of rescuing his wife as Claire fights for survival.
Richard’s plans are foiled when young Ian, with the assistance of Chief Bird and his fighters, rescues Jamie from the former’s men. Ian and the others track down Claire’s whereabouts, assassinate Richard’s men, and rescue Jamie to locate Claire. 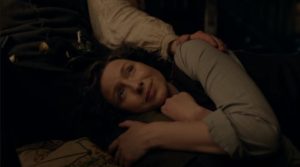 Jamie may arrive in Wilmington sooner than expected if he manages to evade Richard’s men. As Malva’s guardian, he is expected to be the most vehement in his desire for Claire’s demise. Nonetheless, he supports Claire and opposes Richard to ensure her safety.
He provides Claire with funds to cover her expenses while she is incarcerated and assures her that he will remain in Wilmington for her.

Before leaving Claire, for the time being, Tom assures her that he will protect her from Richard’s vicious intentions. Tom’s demeanor and language suggest that he is aware of Claire’s innocence.

He may even be aware of the killer’s true identity, which may explain his efforts to protect Claire. If that is the case, he can testify in her favor in court, potentially saving her from death and Richard’s evil intentions.