DISCOVER THE SUMMARY AND EXPLANATION OF THE END OF EPISODE 3 OF SEASON 6 OF OUTLANDER ON NETFLIX! SPOILERS!

Outlander is available on Netflix! If you want to know the summary and explanation of the end of episode 2 of season 6, read on! All the signs pointed to Fergus’ story getting worse before it got better, but just because it wasn’t surprising didn’t make it any less heartbreaking. To know the number of episodes of the new season, read this.

Our Fergie Ferg is injured. That doesn’t excuse the fact that he was a drunk and was horrible to Marsali, but he’s not his best. And at the start of “Temperance,” it just goes lower. 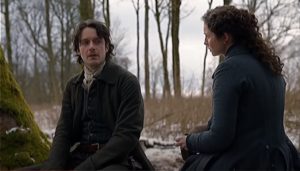 It’s a way to start a television episode. Fergus and Marsali’s newborn, Henri-Christian, is in a basket and a bunch of stupid kids threw him into a river. A river! And he’s headed for a waterfall. This shot from inside the baby basket when Henri-Christian heads for the cliff? It’s really too much. To know everything about the release of episode 4, read this. Here is the summary and explanation of the end of episode 3 of Season 6 of Outlander!

Season 6 Episode 3, titled “Temperance,” begins with a group of children putting Henri-Christian in a basket to sink in the river to test if the baby is a demon. Tom Christie meets Claire and tells her that her left hand is healed to proceed with the operation on the right hand. When Claire asks him to take the ether she prepared, he rejects it and undergoes the operation without anesthesia.

After the operation, Tom spends a night with the Frasers so Claire can watch him. Intrigued by Tom’s peculiar behavior towards her, Claire asks Jamie if he was in Ardsmuir prison when Malva was conceived. He begins to have the same doubt when Malva tells him she was born in Scotland.

When Marsali reveals to Fergus that she killed Lionel Brown for the cruelty he inflicted on their family, Fergus is emotionally hurt. He feels sorry for his inability to protect his family and begins to be ashamed of being protected by his wife. Offending Marsali, he again sinks into alcoholism.

He attempts to kill himself thinking he is not capable enough to protect and support his family as a man. He cuts his nerves to empty himself of his blood. However, Jamie saves Fergus from death. His adoptive father tells Fergus that his family needs him more than he provides them. Jamie’s words help Fergus understand that he must overcome the guilt he suffers from for no reason. These realizations lead him to reconcile with Marsali by swearing to stop drinking alcohol.

In the wake of the impending war, Milton supplies the Cherokees with rifles to influence them to become potential allies on the battlefield. The Governor realizes that denying the Cherokees’ claim will cause them to side with the Rebels, which will have a negative effect on the Crown and the Loyalists. By transferring the weapons to the Cherokees, Jamie can warn them of their fate and the outcome of the war he already knows thanks to Claire and Brianna.