Rebel Cheer Squad: Where was the Netflix series filmed?

Rebel Cheer Squad: Where was the Netflix series filmed?

WHERE WAS SEASON 1 OF REBEL CHEER SQUAD FILMED ON NETFLIX?

Netflix now has The Rebel Cheer Squad! Continue reading to find out where the series was shot! Holly Phillips, Sameera Steward, Shazia Rashid, Dan Braham, and Karissa Hamilton-Bannis, the writers of the thriller Rebel Cheer Squad series, did an excellent job writing the show’s script. They designed her in a way that is appropriate for her generation.

Each of the main characters, including Clara, Grace, and Rumi, has a distinct character arc with multiple layers.

These details enhanced the characters’ dynamic, authenticity, and interest. In addition to the lighthearted but gripping mysteries, the series emphasizes the main character’s insecurities, which makes them endearing.

Clara’s insecurities about her sister’s relationship with her father, Rumi’s insecurities about being a forward-thinking person, and Grace’s self-doubting characteristics, for example, have increased the plot’s intensity. It’s here if you want to know if the series is based on a true story.

The writers of the series should be commended for giving each character a distinct personality and for providing the audience with engrossing plots. We tell you everything about where Rebel Cheer Squad was filmed!

WHERE WAS THE FILMING OF THE REBEL CHEER SQUAD?

Rebel Cheer Squad is shot entirely in the United Kingdom, specifically Greater Manchester. Filming for the first season of the thriller series is said to have begun in June 2021 and ended in September of that year.

Season one of Rebel Cheer Squad was shot entirely in Greater Manchester, a metropolitan county and combined authority area in the North West of England. 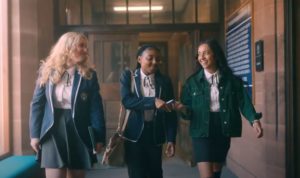 It’s also possible that the cast and crew will camp out in and around Le Mans Crescent in Bolton, as they did in the original series. During filming, they were also seen in Manchester filming some key scenes from the first season of Rebel Cheer Squad.