Stranger Things Season 5: Is Eddie dead? Will he be back?

Stranger Things Season 5: Is Eddie dead? Will he be back?

DISCOVER IF EDDIE DIED IN STRANGER THINGS AND IF WE’LL SEE HIM AGAIN IN SEASON 5!

Stranger Things is now on Netflix! Continue reading to find out if Eddie will return in Season 5! We knew the Stranger Things cast would be a little lighter at the end of Season 4 Part 2, but it was unclear who would leave the show before Season 5. Read on to find out when Season 5 will premiere.

Nancy was in a pickle when we left her at the end of the previous chapter, while Max was at the top of Vecna’s list after she and Kate Bush humiliated him by escaping his slimy clutches.

In the end, however, it was newcomer Eddie Munson, played by Joseph Quinn, who faced his creator. So, is Eddie truly dead, and will he return in Stranger Things Season 5?

Unfortunately, there doesn’t appear to be much leeway. Eddie’s fate in the Stranger Things 4 finale is confirmed later in the episode when Dustin speaks with Eddie’s uncle. Read on to learn about Nancy, Jonathan, and Steve’s future.

So, yes, Eddie is dead at the end of Stranger Things Season 4. Although there was strong fan support for Eddie to survive Season 4, it appears he was doomed to a heartbreaking fate.

We should have guessed it in episode 8 when Eddie and Dustin shared an endearing moment before the big mission. Eddie told Dustin Henderson, “Never change.” “You promise me?” Dustin responds, “I didn’t mean to.” Even if Eddie died, it’s clear he had a profound influence on his young protege. 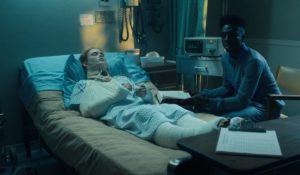 Eddie quickly became a fan favorite, so it’s only natural to hope that he’ll appear in Stranger Things season 5 in some capacity.

In June, Joseph Quinn revealed his Season 5 plans, saying he was “pushing” to collaborate with his friend Charlie Heaton, who plays Jonathan.

Quinn’s return is not completely ruled out, even if it appears unlikely at the moment. Dustin will undoubtedly be mourning his friend for some time, just as Max was after Billy’s death in Season 3. Max’s guilt was so strong that Dacre Montgomery appeared in a cameo!

This situation was traumatic in a very different way than Eddie’s death, but the Stranger Things universe can certainly capitalize on Quinn’s charm with a cameo or flashback.