The Contractor: Is it based on a true story?

The Contractor: Is it based on a true story?

FIND OUT IF THE CONTRACTOR IS BASED ON REAL EVENTS ON AMAZON PRIME VIDEO!

On Amazon Prime Video, you can watch The Contractor! Continue reading to find out if The Contractor is based on a true story! A pastor leads his congregation in a prayer for “our protectors,” i.e. the Army Special Forces headquartered at Fort Bragg, in the opening sequence of The Contractor.

The pews are packed with soldiers, former soldiers, and their families. Medic Sergeant James Harper, who is played by Chris Pine with a subdued and subtle physique, is one of them. Read this to find out why The Contractor ends the way it does.

When James’ mind wanders away from the sermon, perhaps to the mounting pile of unpaid bills, his torn knee, or the deployment he just completed, his fourth in five years, it’s his young son’s “Amen.” that brings him back. This brief but powerful moment of connection serves as a reminder that this story is as much about fathers and sons as it is about the price of being a good soldier. But, is The Contractor based on a true story? We’ll tell you all about it! 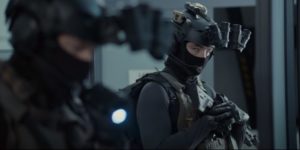 IS THE STORY ABOUT THE CONTRACTOR TRUE?

The Contractor isn’t based on a true story, to be sure. JP Davis wrote the screenplay for Saleh’s film. “The Contractor” is set in a world that is very similar to our own. Corporate greed has put humanity in jeopardy.

It’s highly contagious. One strain of HPAI, A(H5N1), has become an epidemic in non-human animals, affecting a variety of bird species.

That’s what we’re talking about when we talk about avian flu. This virus has killed tens of millions of birds of all kinds. When it comes to humans, it has a high mortality rate. At this time, many vaccines against the virus are said to have been developed and stockpiled by countries around the world. It’s obvious that The Contractor isn’t based on a true story, but, understandably, someone might believe it is.