GET EVERYTHING YOU NEED TO KNOW ABOUT THE RESIDENT SEASON 5 EPISODE 17!

Rest assured that The Resident season 5 episode 17 will air next week, based on what you saw on Fox tonight! Also, expect more great drama from beginning to end there! For some characters, “The Space Between” will be an emotional episode, and Conrad will be working on a case that is personal to Gigi. After all, one of her classmates becomes ill, and the situation quickly escalates into something far more serious than it appears.

Go ahead and check out the full The Resident season 5 episode 17 synopsis to learn more about what’s in store:

Conrad helps one of Gigi’s classmates with a stomachache that develops into something much more serious. Devon, meanwhile, takes a group of interns to a senior living facility, where they meet a former doctor whose wife becomes ill while they are there. In the all-new “The Space Between” episode of THE RESIDENT airing Tuesday, April 5 (8:00-9:01 PM ET/PT) on FOX, Leela discovers some unsettling news about the business while looking for a sperm donor for the Padma. (RES-517) (D, L, and V on TV-14) 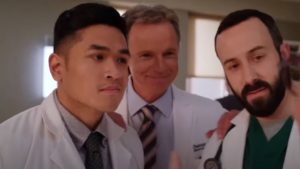 We hope that some of the stories will be carried over for the rest of the season, especially since it’s unclear how things will wrap up this time. Is there going to be an emotional cliffhanger? Are there any other major characters in danger? Much of the season feels like it’s been about resetting things after Nic’s death, and we may not get a full picture of what the future holds until we reach the end.

What are your expectations for The Resident season 5 episode 17?

Do you have any specific expectations? Please share right now in the comments section! After you’ve done that, remember to return for some additional updates you won’t want to miss.