This Is Us season 6: The song that Rebecca performs at the wedding?

This Is Us season 6: The song that Rebecca performs at the wedding?

Get Everything you need to know about This Is Us season 6!

Tonight’s This Is Us season 6 episode 13 featured Kate and Phillip’s wedding, but what song did Rebecca perform? We anticipate that this will be one of the most frequently asked questions following this episode.

After all, the song Mandy Moore’s character sang was deeply moving, a love story, and, in many ways, a synthesis of her entire story on the show over the years. It also contained several sound cues that should be familiar to those who have followed the series closely over the years. They are included in the score!

We have a feeling that many people will be listening to this new, extended version of the show’s closing theme on repeat after this episode concludes. (The original composition for the show was written by Siddhartha Khosla, and you can listen to it below.) 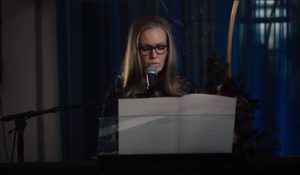 For those who are curious, EW reports that Rebecca’s song tonight is called “The Forever Now,” and it was co-written by Khosla and Moore’s real-life husband, Taylor Goldsmith. You can listen to it below as well! It’s something made specifically for this episode, with the idea appearing to be to almost tying the show’s score directly to Rebecca’s memories, which have been a major part of the story since the beginning. Everything we see and hear feels connected in this way.

Before we go, one more thing: Give Moore all the Emmys with this episode and her portrayal of this character over the years.

What did you think of Rebecca’s wedding performance on This Is Us season 6 episode 13?

Please share your thoughts in the comments section as soon as possible! Once you’ve done that, stay tuned for a slew of other updates.