Uncoupled Season 1: Who is Kai’s father?

Uncoupled Season 1: Who is Kai's father?

IN UNCOUPLED ON NETFLIX, FIND OUT WHO KAI’S FATHER IS! SPOILERS!

Uncoupled is now on Netflix! Continue reading to find out who Kai’s father is! In recent years, Darren Star has had a hit on Netflix with Emily in Paris, a series that is either the death knell of TV comedy or a sunny, superficial jaunt whose pleasures of idleness are just that. Star, the creator of “Sex and the City” and “Melrose Place,” has a talent for transporting viewers to lavish settings.

Uncoupled stars Neil Patrick Harris as Michael Lawson, an upper Manhattan real estate agent whose long-term relationship with a character played by Tuc Watkins breaks down before Michael realizes it. Read on for an explanation of the ending. Read this to find out if the movie is inspired by a true story!

Michael is forced to continue working and date other people while pretending not to be devastated. If you’ve seen the movie, you’re probably curious about Kai’s father. In Uncoupled, we tell you everything!

WHO IS KAI’S DAD?

Suzanne did not consider finding Kai’s father and instead assumed the roles of father and mother herself. She was always concerned about her son and did her best not to make him feel as if he was missing a father figure as he grew older.

However, as an adult, Kai searches the Internet for his father and arranges a meeting. He first considers meeting his father without informing Suzanne.

Kai is relieved to learn that Suzanne is also his father, and he cancels the meeting with his enigmatic father. Suzanne’s curiosity wins out, and she goes to meet her son’s father.

She arrives at the bar where Kai and his father were supposed to meet, looks inside, and is shocked to see the unidentified person. 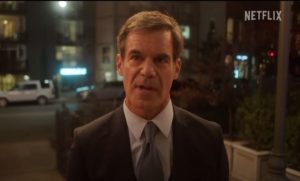 Even though the first season of the show does not reveal who the father is, it does leave enough clues for anyone to guess. Given these hints, Paolo Forella, the wealthy Italian who approaches Michael and Suzanne for assistance in purchasing an apartment, is most likely Kai’s father.

Because the father could be from Amsterdam, Berlin, or Rome, according to Suzanne’s revelation to Michael, Paolo could be Kai’s father. It’s possible that the two had a one-night stand during Suzanne’s stay in Rome.

Also, as his Grindr username is “ItalianBiBusinessman,” the series establishes Paolo’s bisexuality, which Michael confirms before having sex with him. This specific detail could indicate that Paolo had sex with women, including Suzanne.